Zurich, famous for being one of the most expensive cities in the world. It lived up to this reputation pretty quickly on my arrival as I had to pay 2 Swiss francs to use the public bathrooms at the train station – having said that, they WERE the cleanest and most spacious public toilets I have ever used, although I did feel like I should luxuriously take my time using the facilities (including sinks and extensive mirrors) since I’d paid for them. Later I discovered a little cafe in the  station that sold coffee for 4.20CHF and had a bathroom in it, so there you go. I’d much rather get a coffee with my toilet break than just pay for the bathroom. The Zurich main station, by the way, is ENORMOUS – it’s more what you’d expect from an airport than a railways station, but without the maddening waiting in lines to check your bags and go through security. It also featured a Christmas tree completely draped in Swavorski crystals which sparkled like nothing I’ve seen – unfortunately, these didn’t come out in the picture! 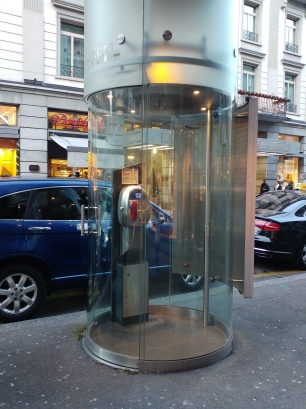 Even the phone booths look fancy. 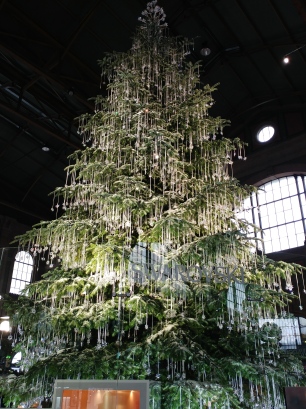 Swarovski snowflake tree.
My knee had been in serious pain overnight so I also sought out a pharmacy, which I initially thought had very little stock and was more of a pharmaceutical convenience store – it turns out most of the stock was just out of sight. After enquiring about magnesium the pharmacist typed away on his screen and before I knew it, the various options had shot out of a dispensing chute from behind what had appeared to be a purely decorative wall.
The city itself feels much like any other, although the streets in the old town are charming, and everything is very up market and clean. However just a few train stops out and the crisp mountain air (about 0 degrees at this time) really lifts a weight from your shoulders. I hadn’t felt so relaxed in a long time.
It also surprised me that despite being at a higher elevation the Swiss seem to dress less warmly than the Germans along the riverlands. The locals were just wearing sneakers and jeans with the cuffs turned up, exposing their ankles, sometimes with a scarf but few hats, and no gloves… our accommodation really leaves nothing much to speak of, but it was close to the station.
FOOD
We grabbed a quick lunch at the station as we were too early to check in to our accommodation, and in the time it took to eat a slice of quiche I overheard the waitress at the cafe speaking in 4 different languages to different customers. Impressive. What struck me even in this short amount of time was that food in Zurich was obviously expensive if you ate what you were specifically looking for (a small plate of bain marie Chinese “food court food” that would cost $6.80 in Melbourne converted out to about $17.50) but if you’re happy to eat whatever is cheap and convenient (a wrap or sausage for example) you can still eat for around the $6-7 mark which is pretty normal. 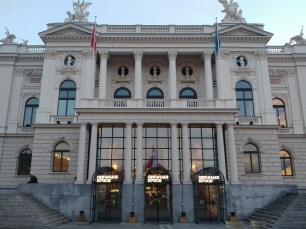 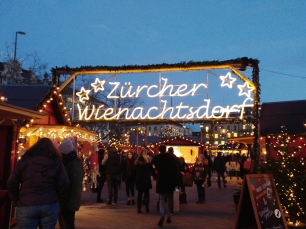 I have to say that the Zurich National Museum is the best museum I’ve ever seen. The displays are highly interactive and in very clever ways. Points of interest for me included learning that the Christian reformation led to an increase in fine filigree jewellery which was considered more modest than heavy gold chains which had been popular in the past, and with the wealthy Catholics. I was also fascinated by the peace treaties with their seals, and by the ‘regimentspiegel’, a huge planetary depiction of government in the 16th and 17th century consisting of concentric rings of house crests. It also included notable births and deaths of the year 1657. It was elaborate and certainly impressive to look at, a work of art, but also very functional, which was a contrast to the Catholic ostentation. Between Maggi, Nestle and Schweppes it also seems half the worlds now-global food conglomerates initiated in this small area. 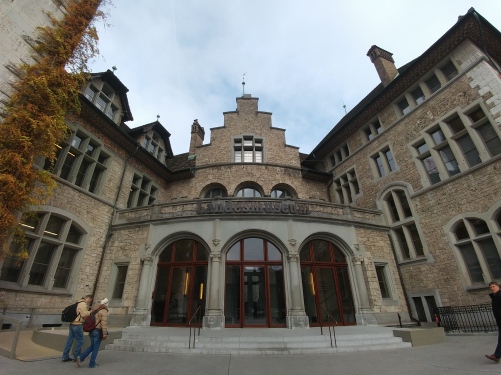 The 24 hour Zurich card can be bought and validated at any public transport ticket machine, which I think is a great idea compared to most other cities where you can only buy it at a tourist desk or museum entry. I wonder if it increases the uptake? It’s easily good value if you plan to take just a couple of trains or trams and visit even a couple of museums. The public transport is EXTREMELY efficient and you can easily get around on what seems to be the continuous stream of intersecting trains, trams and buses. Each carriage has a screen which depicts not only the stop you are arriving at, but which other lines intersect with it and what time and platform to expect the next connecting service, as well as whether or not they are running on time. It’s a fabulous system and the first place I would say I would actually be HAPPY to catch the public transport.

Aside from the National Museum, I also really enjoyed a small exhibition featuring a scale model of Zurich in the 1700s, as well as the watch museum (it’s in the basement of a luxury watch store) with it’s astonishingly impressive collection of old watches and time pieces including gemstone studded mantel clocks, sundials and pocket watches (I love pocket watches). They had a pretty good ipad-based information system which could provide the background on each piece, and for some of them show their special functions in motion via pre-recorded videos. Definitely worth checking out. Although you might be tempted afterwards to buy a luxury watch! 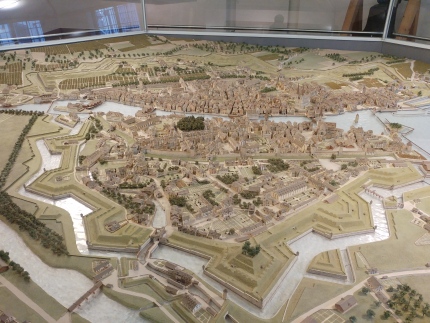 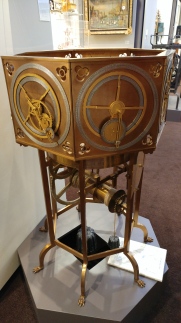 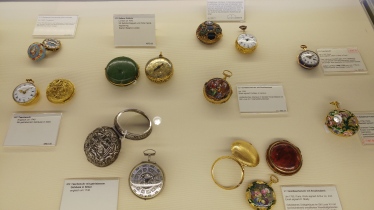 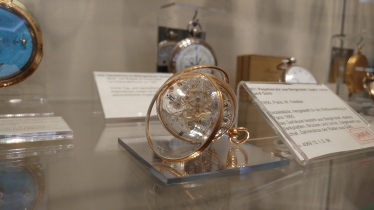 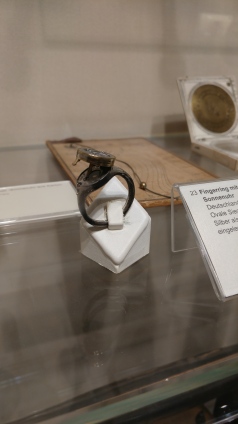 Sundial ring
FOOD
So… the food. Needless to say I was quite happy to be in a country whose national cuisine is essentially cheese and chocolate! Of course I had to have some of the fabled fresh Swiss chocolate, which was as melt-in-your-mouth amazing as you would expect, though rather pricey (about $10AUD per 100g). Our first dinner was at a trendy sort of restaurant in an old converted stable, which was a really cool environment (complete with tethering posts and old feed and water troughs which actually made a convenient spot to put our backpacks) but the food itself, while good, was also quite small for the prices, so it didn’t blow us out of the water as it wasn’t exactly fine dining either. 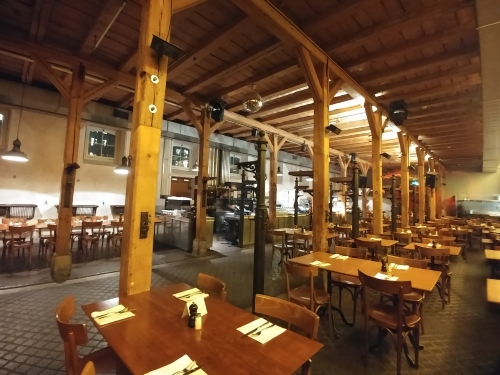 Dining in an old stable

On the second night, we sought out a more ‘traditional’ Swiss restaurant called Adler’s Swiss Chuchi which was absolutely PACKED. At first they told us we could only have a table for an hour before another booking came in, but in the end someone left and we were able to have their table and take our time.
Of course the focus was on cheese, so we had a fantastic Raclette platter with 3 kinds of meat, as well as a fondue with Speck and plum brandy. While the veal, beef and chicken was beautifully seasoned, it was in quite small portions and also the beef was a little tough, but a great flavour comparison side by side with the veal. The fresh field mushrooms were probably the best I’ve ever tasted, they had an incredible rich flavour considering they weren’t marinated or seasoned at all. And whilst the meat portions were fairly small, we ended up being stuffed full due to the huge volume of bread and the literal sack of potatoes (which was super cute) we were given. The potatoes themselves were different to the white potatoes we get in Australia, being a beautiful golden colour on the inside, and light and fluffy to boot with a warm velvety flavour. It was also the first time I’d tried Kohlrabi (literally translates from German as Cabbage Radish) and I actually quite liked it. The waiter insisted that you can’t get them outside of Switzerland, but I’m sure I’ve seen it before. 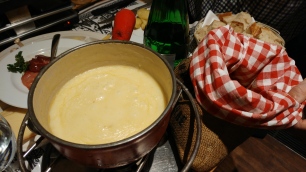 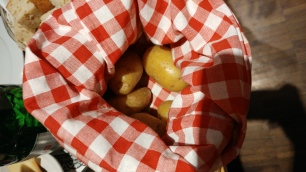 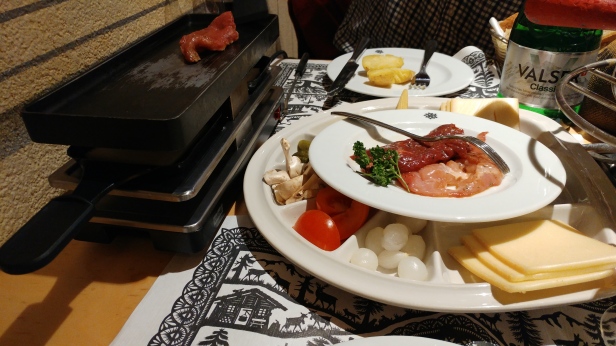 Raclette Grill
FOOD FOR THOUGHT
Outside of the city there are similar small garden patches as I’d seen in the German countryside, so it seems to me that the overall wealth or public image of the nation need not correlate – it’s simply a lifestyle choice that Australian’s have not been brought up to make (save perhaps those with Mediterranean grandparents!)