Following Milan, I metered my expectations for Taste of Paris (whilst at the same time, expecting my lowered expectations to be exceeded – confusing, no?).

The Taste of Paris was held in the Grand Palais – the larger of the two exhibition centres on the Champs-Elysees. This is a big venue for a food festival. But what else would you expect in France? No sooner had I entered than the sounds and lightly wafting scents of kitchens drifted past. The card-loading system (the same payment system as all the Taste Festivals) was easy and quick, and the attendees spoke reasonable English.

Of course the problem with an event of this size, featuring 19 pop-up restaurants, is that there was so much to choose from, and sadly this time I was on my own as I hadn’t been able to corral any friends to go with me. Which meant that I couldn’t try as many dishes. Tragedy.

Nonetheless, I’ve been to enough of these to have a good idea of what I like, what I can safely push my boundaries with, and what combinations are likely to be good (for example – basil and strawberry – sounds a little odd to the less experienced foodie I’m sure, but it’s almost always spectacular – see further down this article!). I narrowed my choices down to 5 from the menu, with a couple of back ups just in case I didn’t like what I saw.

The restaurant stalls were absolutely crammed with chefs in relatively small areas – around 15 per pop-up – and working as one sleek efficient machine they served up the dishes to the waiting public at a remarkable pace. And that was just as well, considering several of these venues had some serious queues! Having said that, it was handled very well, with each venue having it’s own neat cordons to ensure the line doubled back on itself in an orderly fashion. It was the first time I’d seen this kind of precision at a food festival.

First on my tasting list was the lobster ravioli in spicy bouillon from Kei, which I believe had the longest line at all times of the day. I don’t normally eat seafood, but I have a degree of trust in these high end restaurants and their handling of ingredients, so I had faith that it wouldn’t be unpleasantly ‘seafoody’.

My faith was rewarded. Two delicate lobster filled ‘ravioli’ – really more like dumplings – in a fragrant but light soup. I should note that ‘spicy’ is probably an incorrect translation and ‘spiced’ would be more accurate, as there was really no chilli as far as I could tell. Far from being ‘seafoody’ this dish was extremely light and played more strongly on the fresh herbs than on the lobster, but still had enough weight for the ravioli to carry themselves in the dish and not get lost.

My second selection was a soup of baby peas, creamed with young onions, puffed rice, nutmeg and truffle from Le Pré Catelan. I felt there were two odd things about this dish. Firstly, the smell was meaty yet the taste was still very fresh and green. Secondly, although there appeared to be a lot of truffle in it, I couldn’t taste it at all, even when holding the air in my mouth afterwards, which normally works very well for making the most of truffle aromas. 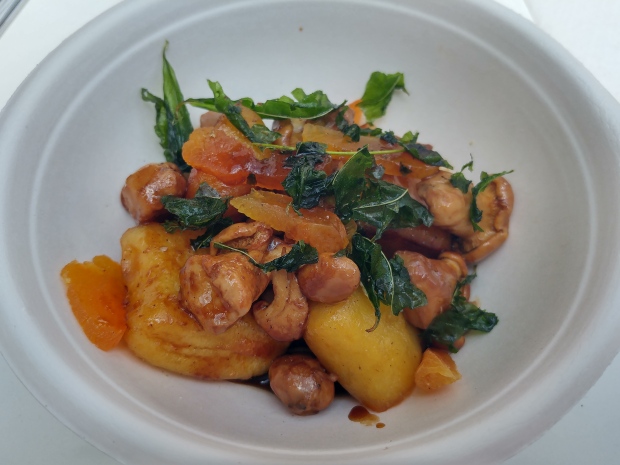 Then followed Tomy & Co’s crispy gnocchi with girolle mushrooms, apricot and verbena. I’ve never eaten verbena before, although I’ve drank it in a tea. It has a savoury taste that is somewhere between a very subtle basil, and nettles, but added a nice crispyness to the dish. The predominant flavours were sugar and vinegar – sadly, I didn’t feel like the mushrooms added the richness I was expecting, although perhaps that was more fitting for a spring dish rather than an autumn or winter plate. The mix of dried and fresh apricots also provided a nice contrast, and the aroma was that of a base stock, but overall I felt a little disappointed by this dish – it just didn’t live up to the potential in my eyes.

As usual I tried to pick one dish that sounded deceptively simple – in this case the assorted tomatoes with strawberry, mozzarella and vanilla oil from Mandarin Oriental Paris. I always enjoy a tomato and mozzarella salad anyway, but the addition of strawberries was something new. Of course this was Paris, not Italy, where the masters of simple ingredients live – so a creative French twist on simple raw ingredients is to be expected I’m sure! And as usual when picking one dish with deceptively simple ingredients, I wasn’t let down. In fact, I think this was my favourite dish of the day (closely followed by the dessert).

It was salty and sweet, cool and textural, with incredible bursts of flavour from each of the tomatoes. The green tomatoes were tangy and savoury, orange fruity, the brownish colour delivered a rich and savoury flavour, while the classically red tomatoes were the lightest and most refreshing. I really can’t rave about my love of heirloom tomatoes enough, and this not only reached my expectations but smashed through the ceiling and left them in the dust. Amazing. 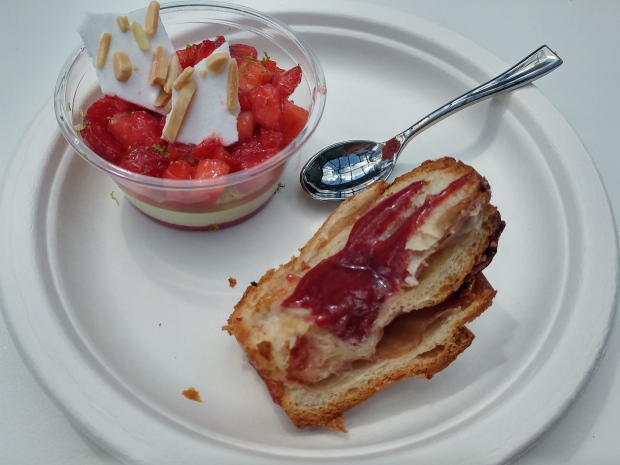 Last but certainly not least, dessert (oh my). Les Maisons by Guy Savoy served up a fresh strawberry and basil mousse with a lemon jelly, and layered strawberry brioche. As mentioned, I knew this was a combination that wouldn’t disappoint, but that didn’t stop it from knocking me out with it’s explosion of flavour. The brioche was nice, but certainly not the centre piece for me. I don’t think there is a better flavour to encapsulate the optimism of Spring Teetering towards summer than aromatic basil, sweet fresh strawberries, and a subtle citrus tang. You can almost smell the warm country breeze.

Finally, I was also pleased that Taste of Paris was well provisioned with the central market section, which Milan had strangely lacked. Although having said that, I was surprised that there weren’t more stalls selling cheese. I believe there were only about 3, in fact. But whatever your heart desired you could find – wine, fresh oysters, cured meats, cheeses, cider, preserves, and deliciously flavoured oils, of which I bought several miniatures – being 50ml each, and seriously aromatic, they will serve me will in the next leg of my journey when wanting to up the standard of my hostel or host-kitchen cooking skills without fresh herbs on hand. And they’ll pass through airport security. What a find.