ATTRACTIONS
This was a big day of again cramming a lot into a short amount of time before we headed out of Italy and into France. I had my sites set on the Archaeological museum – little did I know trying to get in there in itself would be a confusing endeavour, and none of the museum staff seemed to speek a word of English. The entry is actually through the basement of the gallery, and it continues out to the back (past a door which I had initially been shepherded away from as the lady for some reason thought I was looking for the exit).

The 4-in-1 ticket, one of the more attractive entry passes

The old Roman palatine gate and part of the theatre is visiable from the outside of the building, but while the nearby walkway (behind a tall gate) might look like the main entrance for the Archaeological museum, it’s not. You have to go into the main palace and buy an all in one ticket for 4 museums. Once successfully inside the Archaeological museum I was excited to see the other half of the old theatre in its semi-excavated state, preserved under the vaults of the later palace in a wonderful example of urban development, as well as a map showing an overlay of the modern city layout over the old square roman town.

Ruins of roman theatre under the vaults of the palace

Another feature is a small room dedicated to relics of Roman “Co-emperor” Lucius Verus (ad 161-169) who apparently used to enhance his blond curls with gold dust, showing us that the pursuit of beauty is truly timeless… Coming back to the map shown above, it was from this overlay that I was finally able to understand how the Pallazzo Madama, a separate palace which I didn’t visit, incorporated elements from 3 different eras (Baroque, Medieval and Roman) as part of the old roman wall and gate are buried within the Baroque renovations. These two (somewhat restored, but identifiable on close inspection by a slightly different colour) towers were later expanded into a medieval castle by the addition of 2 more towers, connecting walls and a moat, and the Baroque facade was added later. If you find this sort of thing as interesting as I do, it’s worth taking a walk around the perimeter of the castle! I’m not certain if any of the roman wall is visible from the inside. 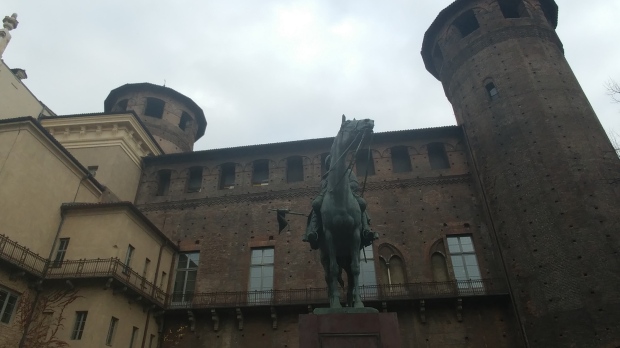 The paler tower on the left is one of the two restored from the roman wall, while the darker tower and wall to the right is the medieval palace, and the cream boxed structure on the left the Baroque facade.

After finally discovering how to get into the rest of the Archaeological museum (there are 8 sections, of which only 5 were open on the day, but I struggled to work out how to get past 2, as mentioned above) I found a large sort of greenhouse full of display cabinets in which there wasn’t a single other tourist. It felt a little like I’d accidentally discovered some sort of archaeological vault and that I wasn’t meant to be there, which sort of made it more exciting than it was. Nonetheless, the collection does include some delightful little bronzes which are full of dynamism and life, including tributes to gods and this stunning little veiled dancer whom I fell quite in love with! At the back of the complex there is a display of an old papyrus document with some of the earliest drawings and maps known on surviving paper. 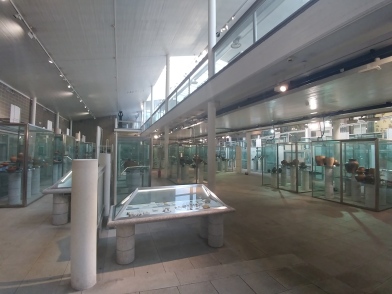 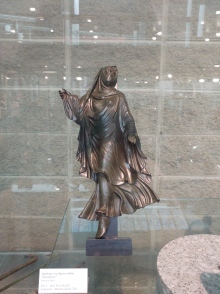 Afterwards I only slipped into the Palazzo Reale as it was included in the ticket anyway and I had some time. This one seemed even more disgustingly gilt than all the others, with doors, picture frames and edging all in gold. One overwhelming room was completely covered in black chinoiserie panelling from floor to ceiling. 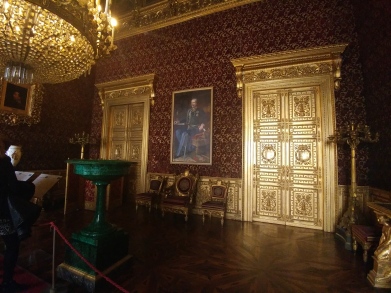 I expected to continue through the palace, but to my surprise next encountered an enormous hall full of incredibly detailed weapons, suits of armor, and slightly terrifying taxidermy horses! The room was all the more amazing because it was unexpected. The armor and weapons are absolute works of art with engravings and exceptionally detailed inlays. Some of the wood inlays on the rifle butts in particular was just spectacular, and I liked this long elaborate dagger which had 2 equally elaborately carved forks tucked into the sheath. Over all, this is an incredible value ticket at 12€ to access all 4 museums and the garden. You could easily occupy an entire day even if some of it was shut (as seems to be the norm in the off season)! 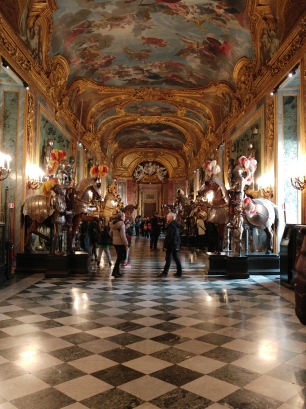 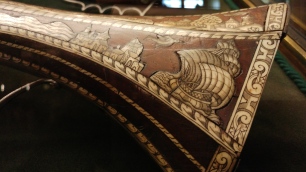 On the other hand, the Museo Egizio was a let down due to overcrowding. The line to get in was around the
block. It began to dawn on me that the way to do it if you don’t have pre-purchased passes, is to choose just one attraction per day and get there early! Unfortunately even in off season, the museum was horribly crowded and the audio guide, given to everyone for free which initially seemed like a good idea, didn’t seem to work very well. If anything it created more congestion, slowing people down for long periods of time, particularly in the early parts of the display. It’s supposed to be one of the most impressive collections of Egyptian artifacts outside of Cairo, something I would normally be extremely interested in, but it was hard to enjoy just because of the atmosphere.

FOOD
Taking the train to Lyon we finally saw some snow at the base of the alps! I also started thinking about wine terminology and how ridiculous it is that the opposite of sweet is dry. You really can’t have a dry liquid. The opposite of sweet I suppose should be savoury but for some reason I feel like it should be called plat.

Of the limited train menu (of course with a captive markup) I chose the cheese platter, which was reasonably generous. I particularly enjoyed the concept of individually wrapped “snack” Parmesan. Unfortunately the apple tarte included as dessert was horribly soggy, cold and wet. As for the wine – I’m not a fan of whites usually but I’ve quite enjoyed the Soave of northern Italy. It has a great balance of sweet and dry without the sharpness that Australian whites seem to have.

Cheese platter on the move!

This French operated train was also by far the smoothest we’d been on so far (between German, Swiss and Italian) – a pleasant experience that was certainly not repeated in Paris later!