It could feel awkward when you find yourself on a rainy night, the sole diner in a very romantic French restaurant where they don’t speak a word of English.

Or you could go with it.

I went with it by ordering an aperitif of KIR Cassis wine and apologising for my terrible French. The venue was Les Trois Marches in Nancy, which was the closest place to my hotel (did I mention it was raining?) which had decent reviews and didn’t have four $ signs next to it. However it did turn out to be rather nicer and more romantic than I was expecting.

When my aperitif came out it was accompanied by a delightful little unexpected tart – which on closer inspection turned out to have 3 mussels buried in its center. The thing is, I don’t eat mussels, although I’ve been trying hard to overcome my “no seafood” gag reflex for years. But the waiter (maybe owner?) was so attentive to me as a solo diner (and trying to manag

e with my total lack of French fluency), that I felt terrible about the idea of not eating it. And for some reason, I trusted that the food here would be good. So I ate it.

Perfectly flaky pastry, creamy fluffy filling, just enough tender vegetables and the mussels so fresh they didn’t have the slightest ‘seafoody’ taint. The nice thing about dining alone is you can really focus on what you’re eating. Now when what you’re eating is not something you normally eat, that’s a little challenging, but that’s ok. I was distracted by my aperitif and the challenges of considering the only-French menu.

For a starter I had the tart with st marcellin cheese. The obligatory bread was just baked, still warm, and impossibly fluffy inside. I have to say it was the best bread I’ve had in my entire month in Europe! And the presensation of the food was impeccable. The tart… The tart was one of the most delicious things I’ve eaten in my life. The pastry, though crispy, melted away to nothing in my mouth. The salad was perfectly composed and balanced with no hint of bitterness, and the red pepperberries set off the cheese amazingly. I thought I read something about the tart having apple, but I couldn’t identify it. The fact they were playing somewhat jazzy remixes of mmmbop and I want it that way as background music was a little odd, though. 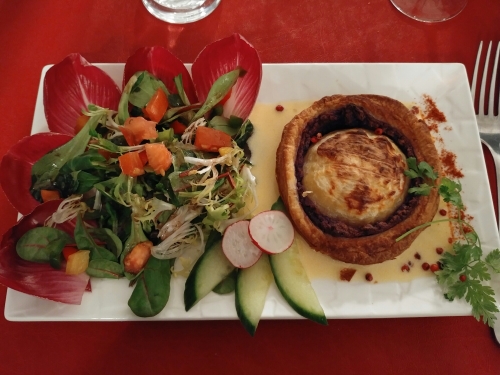 The next song was unmistakably Silje Nergaard, however, which more than made up for it.

The main was a steak known as ‘faux filet’ I have seen on several menus, which I believe is a sirloin steak. It was probably the low point of the meal, but certainly not because of the flavourings of either the steak or it’s accompaniments (scalloped potatoes, mushrooms, and vegetables) but simply because the steak here seems to be tougher than the high quality steak I’m used to in Australia.

For dessert, included in the fixed price menu, I chose a creme brulee with bergamot and mirabelle plums. Oh lordy. Unfortunately for my dad, this was the creme brulee he had been dreaming of and never got, as he went home this morning. At first I thought that the top wasn’t crackling, but that was just because it was so fresh out of the oven it hadn’t set yet. The flavours. Were remarkable and my gosh that satisfying caramel crack rang as clear as a bell when it did harden up. 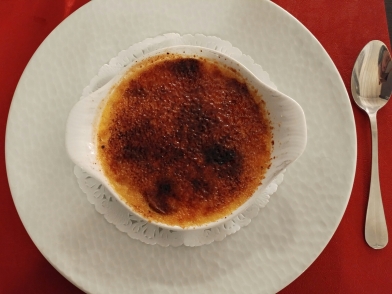 Just look at that caramel top.

I think I just accidentally had one of the best meals of my life, and considering that yesterday I was eating at Alain Ducasse’s Ore, that’s a big statement to make today.

They even gave me a complimentary glass of Champagne ^_^