My visit to Tickets bar has been long awaited – as, of course, you have to book 3 months in advance. Having had one prior incredible experience with a Top 50 restaurant (Attica in Melbourne) I fully enjoyed every day of this lead up.

Did you know that anticipating a holiday or special event gives you as much pleasure as the event itself? It’s even recommended to book your holidays as far in advance as possible to maximise the total enjoyment you derive from the anticipation. I’m sure this is a fact that the best restaurants are aware of, as they release dates so far in advance.

It’s safe to say then that a booking at a renowned venue, coupled with a trip to an amazing international destination provided a surfeit of pleasurable anticipation. Unfortunately the flip side of that is relatively high expectations.

Unfortunately, this visit was both wonderful and terrible.

Tickets delivered on the food (particularly its famous “olives” which exploded with astonishing flavour on the tongue) – each dish was balanced, delicate and beautifully presented – but unfortunately was let down by the service which seemed quite frankly to be… exceptionally confused.

Throughout our two hours we were served and greeted by 6 different people (a hostess, 3 dinner waiters and 2 dessert waiters), the last of whom was unfriendly and rude. The rest of the meal was just poorly organised. We were advised that there were 2 ways of dining – the surprise menu, or a la carte. My friend and I had different dining needs (her eating seafood but no meat, and me eating meat but no seafood) so we weren’t able to maximise the sharing style dishes. She opted for surprise and I, knowing exactly what I wanted from the menu anyway, opted to order individual dishes. I imagine this is where much of the  confusion came from, but if it’s going to cause a problem, they shouldn’t offer the option to dine in both styles. 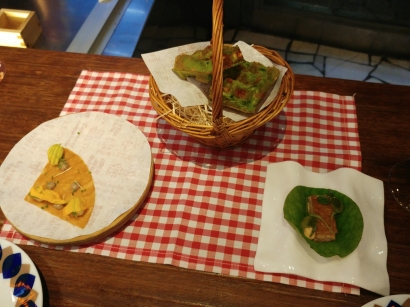 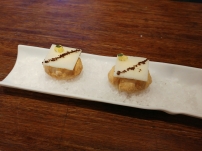 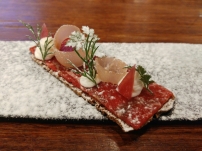 I chose 4 tapas and a main of quail. I also received the famous olives of course. The manchego airbags were just as much of a flavour and texture explosion as the mini olives, and the serving of other tapas dishes as a picnic was kitsch but cute. The Norwegian Landscape (a sort of beef carpaccio) was fascinating with it’s dusting of vinegar flavoured snow, and certainly lived up to my expectations of molecular gastronomy. Up to this point, everything was ticking the boxes and we were having a ball!

Initially we were served at roughly the same pace, with my friend receiving 2 of the same tapas as me and 2 different ones (but at the same time). After that things got hectic. Next she received oysters, which she had expected to get as a starter, during which I had nothing. She then received a vegetarian spaghetti, shortly after which my quail arrived (and was beheaded at the table – not for the faint hearted). For quail, this was a surprisingly filling dish (in reality designed to be shared) which was stuffed with a strongly smoked eggplant and quail eggs, and with our meal so far and these two dishes from the mains menu, we were happy and satiated, ready to move on to dessert. 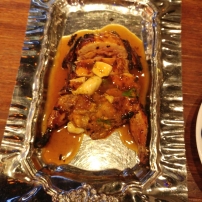 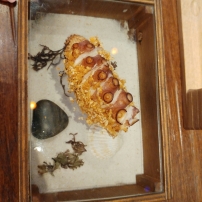 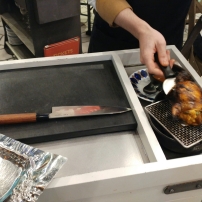 Quail being served at Tickets Bar

Then my dining partner received another main of octopus, beautifully presented but also designed to be shared. And I again sat there doing nothing while she ate. When that plate was cleared, she was told there was one more dish, and I was handed a dessert menu to order from. We assumed of course that her final dish was dessert. When the waiter finally returned to take my order, he started to take it then suddenly ran off in a panic (mid sentence) to serve a course to another group. He then returned, and completed my dessert order.

A little later a DIFFERENT waiter returned… Not with our desserts but with a crab dish and two plates. Firstly I wasn’t eating the surprise seafood menu, and secondly this was the third “sharing” main for my friend who was already full. Confused, we queried if it was for us. With our apparent confusion it was taken back. The first waiter then came back to tell us it was for us and my dining partner said that ok, she’d take it then (as we felt bad about sending it back).

A different host then came and asked if we were ready for dessert. I think we greeted her with blank faced stares, and I explained that we were a bit confused about what was going on. Her response was that she had a big surprise and that we should take our bags and follow her. 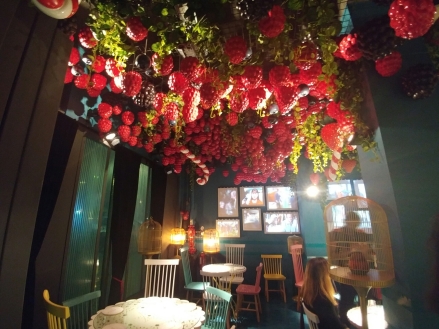 For some reason, we were one of only 3 groups led into the famous dessert bar, bedecked with scented berries and flowers hanging from the ceiling. I don’t know if this room is only reserved for people who look like they’re about to complain or why we were the chosen ones. Most of the other diners were served their desserts in the main dining room. On arrival here another waiter came and asked if we wanted to order dessert – wait a minute.. didn’t I just do that? Anyway we cancelled the order and ordered again, which was a little odd. A spider fell from the hanging strawberries onto my friends leg and we did the ‘get it off’ dance. Desserts came. They were delicious. (Although the fairy floss taco did fall apart). 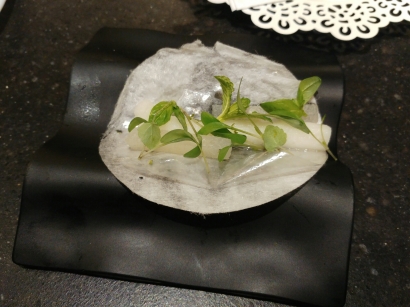 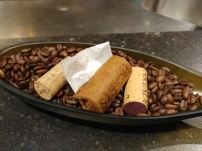 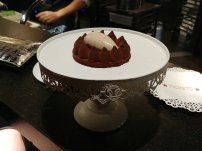 We finally paid, laughed about the disorganised service, but agreed that the price was extremely reasonable for a Worlds Top 50 restaurant, and left in high spirits.

Until my friend got horrible food poisoning overnight, and is now being tested for listeria – suspected bad oyster!

Definitely not the ending we were expecting. 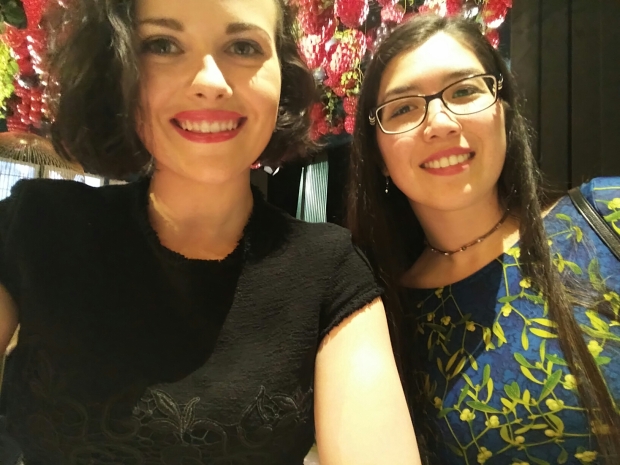 One thought on “Tickets”