With 5 days notice I was looking to fill a mystery few days between Spain and London when my plans for Morocco didn’t pan out. So I simply looked for the cheapest option, which turned out to be Sofia, Bulgaria.

To those who have been to the Balkans or maybe just dreamed of it, I’m sure that nothing I have to say will be particularly ground breaking. However, for someone who had somehow never even heard of Sofia, let alone planned to go there, it was a city full of surprises.

To begin with there is the stereotype of eastern Europe being somewhat more risky, particularly for solo female travellers. There’s also the fact that this was the first place I had travelled to on my own in which I didn’t even recognise the alphabet, let alone trying to guess any words. As western Europe is full of Romance and Germanic languages, there’s at least something familiar to an English speaker, even in the unknown. So naturally I had some measure of trepidation in heading out there, but also a sense of adventure and excitement. As a straight laced risk avoiding often ball of nerves, I’ve never in my life done something so spontaneous as picking a country 5 days out!

Sofia blew me away. The history, the architecture, the food (what little I was able to sample) and culture. I wasn’t aware that the famous Thracians of Ancient Greek legend were from this area, or that the city was riddled with Roman ruins. More impressively they have been uncovered and integrated into the modern city much more skillfully than anywhere I had been so far – you can cross half the old town through the subway tunnels walking amongst the ruins of the Roman town Serdika instead of on the street at ground level, if you choose. 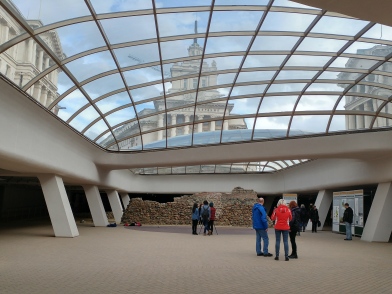 Hub of the subway Serdika complex under the modern city 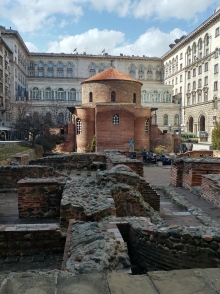 This was the first city where I booked a tour in advance – it turns out there was a free walking tour anyway and I didn’t need to, but I didn’t regret it. I booked the culture and food tour so I got to find out a little about local dishes as well, and ended up having a private tour loaded with information as nobody else had booked. My guide was both knowledgeable and funny, making several jokes about their own culture including that the main foods included pork or lamb, and they considered chicken for vegetarians.

The architecture in the old centre is heavily influenced by the Viennese style and looks remarkably Western European. There’s more on fashion and lifestyle influenced by the west in the Sofia History Museum (located in the old baths which is itself a remarkable building). Be aware that the museums in the center overall are each quite small. 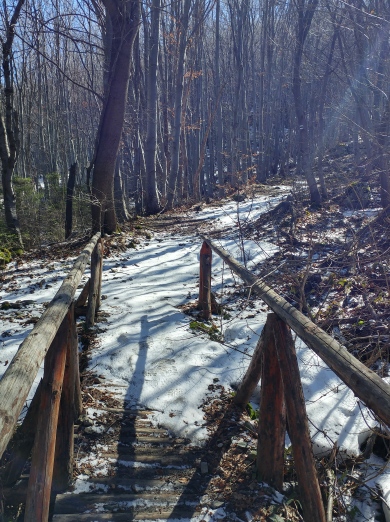 Apparently the National Museum of Bulgaria (located a short cab ride away in Boyana) is larger and well worth it, but unfortunately I didn’t make it there as I met some lovely people at my hostel and we instead took a 3.5 hour hike in the local Vitosha mountain park. Although the walk was stunning, with picturesque forests, fabulous views and dustings of snow left over from the winter, I have to warn you that this is not a casual stroll in the park, as it were. At times the path disappeared in and out and was extremely steep, as well as slippery. Make sure you’re not wearing sneakers – I was very glad to have my good hiking boots – and take some water if it’s cold as there are fountains up the mountain but they weren’t working – maybe frozen over. I’d only recommend this trail to the sure footed and even consider a walking pole. Despite this, it’s very beautiful!

It’s true that it’s a meat heavy culture with little catered to vegetarians in the restaurants, although modern international restaurant Happy Grill (think of a Bulgarian TGI Fridays) has a long list of salads that would make western hipsters go crazy, full of fresh grilled vegetables, whole grains and super foods like quinoa. It’s reasonably expensive by casual Bulgarian standards – but that means about 12 bgn per dish – currently equal to about 6 euros. The traditional Shopska salad is refreshing and delicious, and as much as I had loved the food in Spain it was also a nice change to have something more vegetable-heavy! Yet at the same time it was covered in delicious grated fresh white cheese. 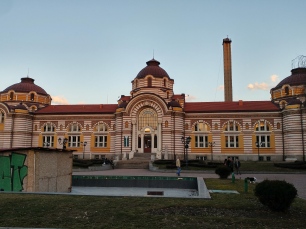 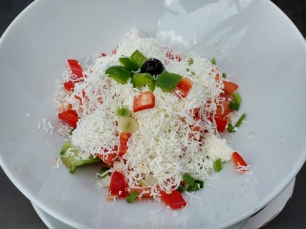 Aside from meat the Bulgarian cuisine is heavily focused on yoghurt and fresh white cheese. Imagine a cross between Greek and Turkish cuisine but with a stronger emphasis on fresh vegetables and a wide range of cold cuts, and you’ll start to get there. I was fascinated to know that the original culture required to make yoghurt only grows naturally in Bulgaria and nowhere else – Lactobacillus bulgaricus. They also have great production of local red wines, the one of which I tried being rich and with strong berry tones and an almost caramelized flavour.

Other than the typical local salad of “Shopska” (mainly cucumber, tomatoes and grated white cheese) I tried 4 local cured meats. 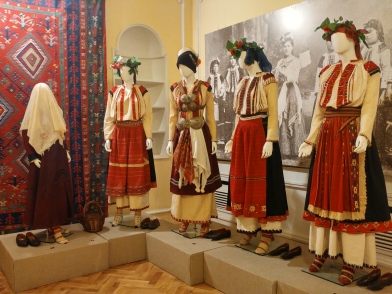 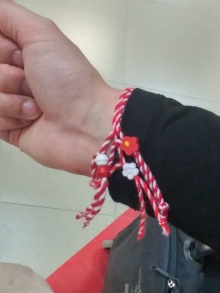 As mentioned before, the individual museums in Sofia are quite small but if you’re interested in traditional dress then the ethnographic museum is a great collection of different tradititonal dress from various regions in the country. There is also a feature on handmade lace in the Sofia history museum at the baths.

Aside from this, I was also lucky enough to be there over the 1st of March, the first day of spring, and able to be part of a lovely tradition. According to my guide, the 12 months are represented by men, from youngest to oldest representing all stages of life, with the exception of March which is an old lady. On the first day of Spring, to keep “Granny March” happy, you should put something of red and white on every friend, colleague and family member you know, representing male strength and female purity. When the wearer sees the first stork of the season, or the first budding tree, they take the token (a bracelet, ribbon, or pinned decoration) off and tie it to the budding tree for luck in the new year. Aside from being charming seeing the stalls lining the streets selling these bright red and white tokens, and feeling very welcome and included by the giving of bracelets at the hostel and by a few people I met, I think this is a lovely tradition as it not only wishes those in your life well for the year ahead, but it forces you to stop and actively look (maybe after a hard winter) for the signs of warmer weather and hope as you keep your eye out for that first budding tree – an ancient form of mindfulness and optimism, I think!

Overall, I’m really glad that I went to Sofia and highly recommend it! It’s safe, friendly, fascinating, and has excellent food to boot. Although I get the sense that it’s a little ‘different’ with its at-times highly Westernised past, it’s still given me a magical taste of the Balkan region and I’m excited to go back.

By the way – the pedestrian crossing system in most places is basically to walk confidently into the traffic – to my amazement, the cars pull politely to a stop. A little nerve wracking the first few times, but you get used to it!