Despite this blog being written 2 weeks late I have to say WOW what an experience.

I’ve been a whisky fan for some time so it’s hardly a surprise that I booked in for the whisky masterclass during my trip to Edinburgh. I couldn’t very well go to Scotland and not. From the perspective of both a tourist and a whisky lover I’d say the whisky experience is well worth it. I did take the masterclass rather than the tour (the whisky barrel ride is awfully kitsch) which meant we had a great introduction to the smells of different flavours present in the whisky, and got to do a fun sensory perception test as well as getting the overview of the history, distilling regions, and doing a bit of a tasting. 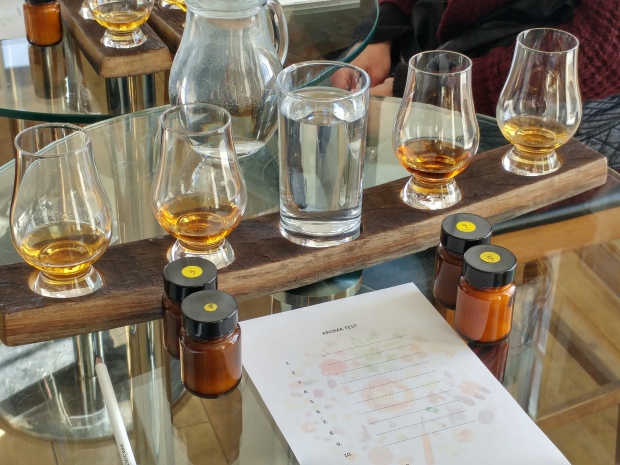 The tour and class also includes a viewing of the Claive Vidiz collection, a private collection of over 3000 rare bottles from the last couple of hundred years. Impressive doesn’t even begin to cover it. There’s so much age and intrigue in these bottles and on top of that it’s a rare glimpse into another world – that of the avid collector. You could spend hours in here hunting out the curiosities, examining how certain brands have changed over the years (for example the Johnnie Walker walking man swapping directions) and what hasn’t.

I really enjoyed the sensory test, it reminded me of when I took a gin blending workshop. I was pretty happy to score 13/14 possible marks for the 7 scents I knew, but sadly there were 3 scents I had never smelled before and was totally clueless about, so my dreams of being instantly recognised as a whisky prodigy did not come to pass.

There’s also a fabulous shop on site with hundreds upon hundreds of options to choose from, and even better a wide range of miniatures – and not just in the cheap nasty varieties as per regular liquor stores. I felt quite like a kid in a candy store and had to literally be dragged away before I bought one of each. As you may know, I love an opportunity to try a bit of everything rather than making a single choice.

Nonetheless I had a strong lure to cut my whisky miniature bonanza short. A new friend I’d made during the course offered for me to go along on a visit to the Diageo private archive – an opportunity which I absolutely jumped at! For those who don’t know, Diageo is one of the powerhouses of global alcohol distribution, the parent company of dozens of brands you would be familiar with including Smirnoff, Talisker, Johnnie Walker and more. Their competitors include United Spirits and Pernod Ricard. To put it into perspective, these guys are like the Coca Cola Amatils and Nestles of the alcohol world. Huge.

And so is their archive. You might not think much about what goes into the marketing of the products you buy but it is far more than the latest seasonal colours and trends. Having worked in Market Research, Analysis and Management before I had some idea of what to expect but the volume absolutely blew me away. It was like the back of house of a museum (yes I’ve also had the privelege of visiting one of these) but without the jars of creepily preserved specimens. Think of the relic vault from Indiana Jones. Rows and rows of compactus containing old books full of original recipes for spirit blends (of course I didn’t take any pictures of these!), posters and contracts. Miscellany, carved wooden sample kits, displays and promotional stands. Anything you could imagine, a treasure trove of the history of marketing and mass production.

And the spirit archive itself? I’ve never seen a display quite so beautiful. Between the two of these I can say I was in the presence of over 8000 rare bottles of spirits this day – something I doubt I’ll ever experience again. Although I do think it’s a shame nobody will ever drink them!